Skip to content
Become a MemberFind a Member
Social

In November 2017, Central Queensland Indigenous Development (CQID) expanded its service footprint into the Fraser Coast region with the establishment of its Family Wellbeing Services in Bundaberg and Hervey Bay. This involved not just the establishment of the service in the region, but the additional challenge of building relationships and establishing a presence in a new community.

One of the new employees recruited to help us meet these challenges is Lavina Little, a Family Wellbeing Officer in CQID’s Bundaberg office. Prior to starting with CQID, Lavina had previously worked at Phoenix House with children who had experienced sexual and physical abuse. 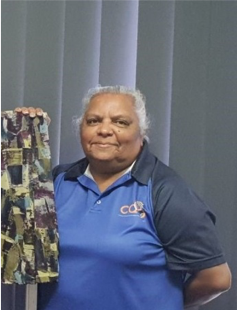 Lavina came to CQID because she wanted to see better outcomes for her community, and knew she could contribute to supporting Aboriginal and Torres Strait Islander children and families in need.

Since starting with CQID, Lavina has seen her aspirations come to fruition. She has directly contributed to improving the lives of local families, as well as playing a significant role in seeing children, previously in the child safety system, be re-unified with their parents.

One such story is that of Mary-Kate (Not real name), who was referred to CQID by Queensland Health in November 2018. When Lavina met with Mary-Kate she found out that she had three children, aged 16 years, 6 years and 2 months old. Mary-Kate’s 6 year old had been in the child safety system for 4 years and her goal was to be re-unified and have all three of her children in her care. Lavina started working with Mary-Kate to address concerns of both Queensland Health and Child Safety, which included stable housing, domestic and family violence, parents physical and mental health and substance abuse.

Lavina started Mary-Kate’s case with a strengths–based approach. She identified and acknowledged that all of Mary-Kate’s children interacted positively with her, and that Mary-Kate regularly was in involved in all of the children’s school activities and education activities. Also, despite being in care, Mary-Kate had contact with her 6 year old on a regular basis, as well as ongoing interaction with relatives and extended family networks. This all contributed to the child’s sense of wellbeing.

Through proactive case-management by Lavina, Mary-Kate sought stable housing and commenced relationship and mental health counselling. This gave Mary-Kate a platform to work towards re-unification.

Today, Mary-Kate is no longer in a domestic violence relationship and continues to attend counselling, as she wants to break the cycle of domestic violence. She is now in stable accommodation with all three of the children.

Mary-Kate has said that if it wasn’t for the support of Lavina and CQID, she may not have been able to achieve the goal of having all three of her children under the same roof, with her.